The earliest recorded owner of Chavenage was Princess Goda, the sister of Edward the Confessor, however there are records of Chavenage Green being the meeting place of the Hundred Court early in the ninth century. In the troubled times prior to the successful Norman invasion, Earl Godwin (Goda's husband), and former friend of the King, gathered a regiment together at a point on the estate, still known today as Longtree Bottom, with the purpose of confronting his brother-in4aw Edward, at Gloucester. The Earl Godwin, and his sons controlled much of southern England at this time and in 1054 had his headquarters at Beverstone. The Godwin family resented the King's Norman advisors and wished to make him see sense; fortunately a compromise was reached and no fighting ensued.

After the Conquest a community of Augustinian monks from Tours in France settled at Horsley, which since Anglo-Saxon times had encompassed Chavenage. Shortly after, however, the Abbot of Bruton, Somerset, was given authorisation to transfer some French property to the Augustinian Order in exchange for the Manor of Horsley and surrounding lands. Thus an English Community was established at Horsley in the late eleventh century.

Due to a serious indiscretion by the Prior in 1320, which resulted in his excommunication, there followed a' long period when the Community at Horsley and the lands were administered from Bruton, Somerset. The administrative headquarters of the estate was presumably in Horsley, where the abbey had a little dependant monastery, but despite this, buildings of some sort had been erected at Chavenage in the late fourteenth century. Parts of the present-day house are thought to date from this period. The house would have consisted of the Great Hall with kitchens at the north end and a one-up and one-down at the south end of the Hall. At this period the fine medieval Cotswold barn (which now houses a modem squash court) was built on the adjoining farm.
The Stevens Family 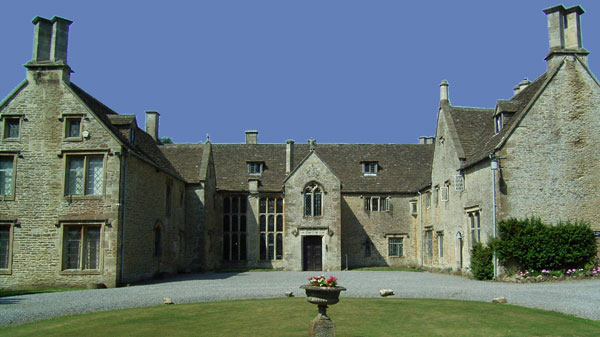 After the dissolution of the monasteries by Henry VIII, the manor and estate were granted to Thomas Seymour, who shortly after Henry VIII's death married his widow Katherine Parr and was subsequently created Lord Seymour of Sudeley by Edward VI. During 1549, Thomas was executed and his lands attained for his role in an attempted plot against the Crown. The property, then reverted to the Crown, was granted anew in 1553 to Sir Walter Denys of Dyrham and in 1564 Sir Walter's son, Richard sold the estate to Edward Stephens of Eastington.

The Norman House of Fitz Stephen originally took its name from the Christian name borne in honour of St. Stephen. The name, over a period, became Fitz Stephens then Stephens or Stevens. The Fitz Stephen family, had come over with William the Conqueror and were feudal barons in Gloucestershire from the reign of Henry II. In the sixteenth century they were a family of wealth and influence in the county with estates at Eastington, Chavenage, Lypiatt, Cherington, Lyegrove (recently owned by the Earl of Westmorland) and Little Sodbury.

On purchasing Chavenage, Edward Stephens started the massive project of a major reconstruction of the site. He gutted the medieval building he found, and put on the two wings and the porch to create a manor house of the classic Elizabethan style. He also fitted the strikingly large windows on the south side of the porch, much of the glass being ecclesiastical coming from the redundant churches and monasteries in the area. He also used old timbers from old galleons, broken up on the nearby River Severn. Upon these rest literally hundreds of tons of mellow grey Cotswold tiles. By 1576, the date carved with his initials and those of his wife Joan were carved above the front door when his work was finished. On Edward's death the house and estate passed to his eldest son Richard. Richard died in 1599 and left Chavenage to his second wife, Anne before his eldest surviving son, Nathaniel (born in 1589) inherited. Richard Stephens was probably responsible for the screen in the main Hall, on which he placed his father's initials. The panelling is contemporary with this period and that of the Oak Room is dated 1627. The Gothic-styled fireplace in the Oak Room is dated between 1587-99 (recently filled in and made much smaller) whereas the chimney-piece in the Great Hall, was constructed in 1625-30.

Nathaniel Stephens was a Knight of the Shire in Parliament and according to the Parliamentary History of The County of Gloucester, the fatal illness which attacked him 'a few months after his acquiescence in the King's death' gave rise to the legend of Chavenage. The story of the Stephens' family ghost is well known and has been told many times, and was in 1845 the subject of a poem by the Rev. R. W. Huntley of Boxwell entitled Chavenage.
Cromwell and the Civil War 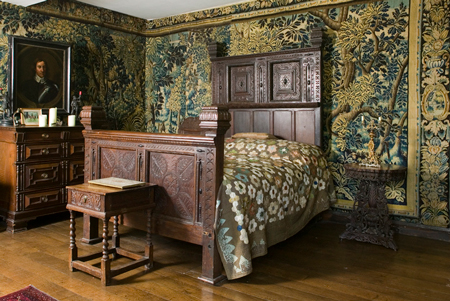 Nathaniel Stephens, M.P., P.C., was Lord of the Manor during the Civil War (1641-45). He raised a regiment of horse of which he was Colonel and fought on the side of Parliament against Charles I. At this time, General Henry Ireton (Cromwell's son-in-law) was a guest, being a relation by marriage of Colonel Stephens.

In 1644, from Chavenage, troops under the overall command of Colonel Massey were charged with the task of besieging nearby Beverstone Castle, which at the time was inhabited by an important Royalist family, a branch of the Berkeleys of Berkeley Castle. After the Roundheads failing twice to breach the strong defences at Beverstone, it was discovered that a young girl at' Chavenage was secretly dating the commander at Beverstone. To let her lover know that the coast was clear and that no attack was planned that night from Chavenage, she would place a candle in a window (see the garden door, leading from the Library passage). On the detection of this subterfuge, a candle was placed in the window and the order given to attack in the knowledge that the commander was away for the night!

After the cessation of hostilities whilst Charles I was imprisoned, it became apparent to Cromwell that the King would have to be executed in order to stop any form of Royalist uprisings. To this end he sent Ireton to Chavenage, to try to persuade Colonel Stephens to add his support to the regicide. Ireton arrived whilst Colonel Stephens was keeping the festival of Christmas in 1648. Stephens, known as a mild man, had shown much irresolution in deciding upon sacrificing the life of King Charles I and was on the verge of wavering when Ireton reached his destination. It is said that they sat up all night and eventually Ireton obtained from Stephens his very reluctant acquiescence.

Shortly after his daughter Abigail returned from having passed the New Year elsewhere, she, in a fit of horror and anger, laid a curse on her father for bringing the name Stephens into such disrepute. The story goes that the Colonel was soon taken terminally ill and never rose from his bed again. When the Lord of the Manor died and all were assembled for his funeral, a hearse drew up at the door of the manor house driven by a headless man, and the Colonel was seen to rise from his coffin and enter the hearse after a profound reverence to the headless personage, who as he drove away assumed the shape of the martyr King, Charles I - this being regarded as retribution for the Colonel's disloyalty to the King. Thereafter until the line became extinct, whenever the head of the family died, the same ghost of the King appeared to carry him off. In Cromwell's and Ireton's room there are several relics from the Civil War including horse furniture, a leather hat cover and several swords and pikes.
Lowsley-Williams at Chavenage 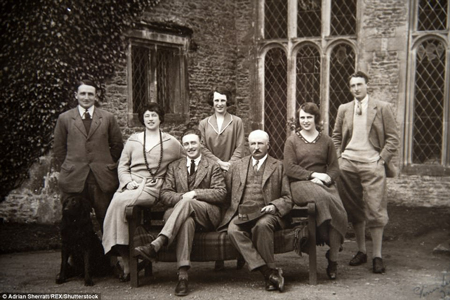 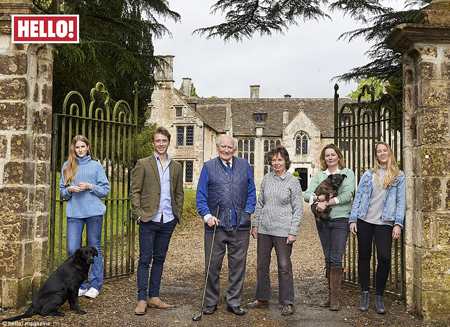 Reverend George Williams, M.A., Canon of Worcester married Mary Lowsley in 1845. Mary was in her forty-second year at the time of her marriage. Next year, she gave birth to the heir of the Lowsley Estates, Mary Caroline Eleanor Williams. In her turn, Miss Williams married Colonel W. W. Hoole of Ravensfield Park of the County of Yorkshire. However sadly, in 1869, she died at the birth of her first born, a son christened George Williams Lowsley-Hoole. As the Reverend Williams was predeceased by both his wife and daughter it was left to him to settle the estates on his death in 1874. Reverend Williams bequeathed the Lowsley property to his grandson George Williams Lowsley-Hoole (the present owner of Chavenage's great grandfather). This property consisted predominantly of the Aston Manor Estate and the Lowesmore Estate towards Minchinhampton and Rodborough with the main residence being Mugmore House.

To inherit the Lowsley Estates, on his coming of age the young George had to add to his surname by Royal Licence and was thereafter known as George Williams Lowsley Hoole-Lowsley-Williams. In 1891 he came down from Yorkshire with his father, Colonel W. W. Hoole, to view his inheritance. Neither of them were attracted by Mugmore House and whilst they were guests of Sir George Holford at Westonbirt, Sir George informed them that Chavenage Estate was for sale. Sir George's father, R. S. Holford had been mortgagee of the lands since the last of the Stephens had left Chavenage in the middle of the nineteenth century, the estate having been in their ownership for 350 years and nine generations. The Holfords had overseen the lease of the property to the Chaplin family (1868-1890).

The Lowsley-Williams have been at Chavenage ever since. George was married in 1896 to Beatrice Mary Savile and they had three sons and two daughters. He was the owner until his death in 1937, when the property passed to his eldest son, Colonel John Savile Lowsley-Williams, D.L., R.H.A. Colonel John never married and lived at Chavenage with his mother and his two sisters, until in 1958 he gave the estate, the house and its contents to his nephew David as a wedding present on his marriage to Rona McCorquodale. Colonel John was suffering from cancer and died three days after the wedding service in the knowledge that the Chavenage had been safely passed on to a further generation.